Training in vocal performance
The Jacobs School of Music at Indiana University and OperaWorks L.A.
To learn more about Judith’s work in the performing arts, please visit Vertical Player Repertory at www.vpropera.org

I am a multi-disciplinary artist—a singer, sculptor, and theater maker. My roots are in the visual arts, and I pursue a parallel vocation as an opera singer and director. In the past seven years, I have returned to a visual arts practice I had put on hold while concentrating on opera. As I develop a body of sculptural work, I continue to perform and direct opera, and serve as artistic director of the indie opera company Vertical Player Repertory.

I have been pulled all my life between the poles of the most ephemeral, music—and that most durable of artforms, sculpture. With my singing I seek to catch the wave of invisible, intangible spirit. With my directing I attempt to sculpt in time. With clay I strive to explore both the fragility and the endurance of our physical being.

Since ancient times, clay has been an extension of the human body. The clay vessel has served to hold water, food, and the ashes of the dead. There is something mystical about the empty space that the vessel protects. I seek a connection to the body as vessel of the spirit, the empty spaces inside the forms, the inside/outside of the body/vessel, the experience of the body as a deeply interior place and yet at the same time an external, protective shell. The visceral experience of wrestling form from earth, water and fire mirrors my own wrestling match with my body and its limitations and contours.

My teachers in the visual arts have included painters Pat Passlof and Ben Dienes, with whom I studied painting as a teenager, and Elaine DeKooning and Leland Bell at the New York Studio School. I was introduced to large scale figure drawing by Marshall Glasier at the Art Students League, and studied ceramic technique with Peter Lane at Greenwich House Pottery. I was apprentice to sculptor Jose de Creeft in his Chelsea studio, and learned traditional carving techniques with the woodcarver Orsos Jakab in Hungary. Other mentors and influences include family friends Milton Hebald, Nancy Spero and Leon Golub. 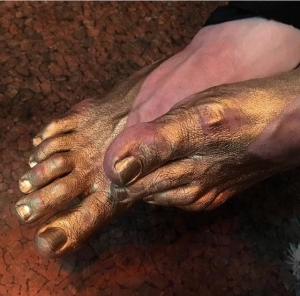